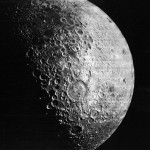 According to scientists at the University of California, Santa Cruz, and the University of Bern in Switzerland, two moons merged in a very slow collision more than 4 billion years ago to create the one that lights up the night sky.

The theory says a collision would explain the vast differences in the lunar landscape. The moon’s far side has mountainous highlands while the side facing Earth is low and flat. Though one prevailing idea is that gravitational tidal forces are to blame for the moon’s lopsided outer layer, commenters on Nature’s website suggested that debris caused many of the moon’s craters on its far side. Read more here